It seems to be getting more popular, people riding pedal cycles to work.

I'm not sure why they do it, maybe to get fit and lose a few pounds (or should that be kilogrammes?), save a few bob (that's shillings, 5p each) on fuel and parking, or maybe to save the planet by using less fossil fuel.

Well, if it's the latter, they are failing miserably. For every mile they cycle, they save the fuel they would have used in their family car. But unfortunately for the planet, they cause every vehicle that has to crawl along in a low gear, following for miles before they can get past, to run their engines inefficiently increasing the polluting effect. I often join a queue of up to twenty cars, vans and trucks stuck behind some wobbly derrier weaving along the lanes, making it impossible to pass.

With the extra pollution they cause and the inability of the average cyclist to take notice of the rules of the road, they are the scourge of the road using society. Tax the buggers! That's what I say!

Oh, dear. It's that time again. Tax is due on the car and the bike, £245 against £33. If that's not bad enough, the bike went in for a service and MOT and the nice mechanic tells me new bits for that will cost many groats as well.

At least the summer is coming, so it will be more fun than riding in freezing conditions - just gotta get the bike back ...
Posted by Kim at 22:10 No comments:

So what is it with BMW drivers? Are they deliberately aggressive and obstructive, is it something they are taught when they by one, is it only that type who buy BMWs, or is there some radioactive device built into the dashboard that rots their brain cells, rendering them total morons?

What about the model built specifically for the school run. The X5, a huge lumbering leviathan, massive tyres and wheels, engines of up to four litres and sufficient ground clearance to drive over a lollipop man without knocking off his hat. And driving it, the tiniest, scrawniest, bleached blonde wag-wannabe, sitting on a child booster seat so she can see between the spokes of the steering wheel. Lost some where in the back is an even tinier clone of the mother up front.

Of course the prospect of walking, to a BMW driver, is just too gross to think about, so school-run-mum will probably drive in, past the no entry sign, up the pedestrians only route and drop little Miss Precious right outside the door. In the supermarket she will drive round and round for half an hour until two adjacent spaces are available, close to the door of course, in which she can abandon this huge lump diagonally across them. Unless there is a parent and child, or disabled persons bay available, in which case she will take two of either, or both, of these.

Of course Mr BMW driver is no better. He will disconnect the indicators so that he doesn't give other BMW drivers a good name, he will follow too close and, when you stop and he can't, he will blame you for not going fast enough. He uses the same measuring trick when parking. Because there really isn't enough room to park his phallic extension he will squeeze it so close to those already parked so that they don't have room to get out. This, again, will not be any fault or concern of the BMW driver as part of the contract he signs when his company gives him the all expenses paid car, is that he can never be wrong.


The BMW itself, is a well engineered motor car, with good performance, comfort and reliability, and I would be tempted to buy one. But how embarrassing would it be to be seen getting out having used the indicators, politely allowed someone to cross in front and parked neatly between the lines of a parking space and not shouted obscenities to the pensioner with the Zimmer frame.

Now this is better! The sun has been shining, the roads are dry and the curves are sweet! We just gotta get them potholes filled.

A warm and dry weekend is forecast, let's hope it lasts in to next week. It will make the journey to work just that little bit less of a drag.

Let's keep it rubber side down!
Posted by Kim at 21:56 No comments:

I should've guessed! As soon as the rain stops and the sun comes out, all the poncy, mincey bikers on their shiny, vibrating crotch rockets creep out from their centrally heated garages and fill up the spaces in the motorcycle bays.
They throb past my grubby little 400cc commuter with their million cc posy bikes, wearing squeaky clean leathers and a sneer - but I bet I've covered more miles in the rain and frost this winter, than they'll do on dry roads all summer!

The weather forecasters got it a bit wrong - there was a frost this morning, but not too heavy and it soon disappeared.  All gone by the time I got to Winchester.
There was lots of sunshine, too! Now that makes riding a pleasure - just them potholes to fix.

While I was away enjoying the countryside in the caravan, they'd decided to change round the office. I had to start the day by installing my own pc on a different desk and moving the old terminal somewhere else. Oh, the trials and tribulations of working in IT!
Posted by Kim at 17:25 No comments:

I've been back on two wheels for a couple of weeks. The snow has gone but we've still had some sub-zero starts to the day, made the old fingers ache a bit but soon thawed out in the nice warm office.

The forecast for the next few days is dry with temperatures starting above freezing and reaching highs of maybe 14C. Positively balmy for biking!

Bit of a hiccup for the Landrover recently. We were heading off to Kent for a family funeral and we left home with plenty of time to spare. Not long into the journey I noticed a lack of power when trying to accelerate, a symptom I recognised from a caravan towing trip towards the end on last year, but not accompanied by clouds of black smoke this time. We managed 25 miles to the Winchester Services on the M3 and pulled in to investigate. 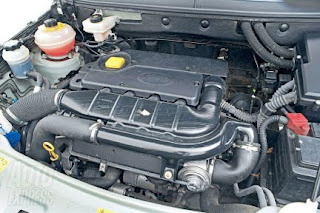 Yep, same as before, a split in the hose from intercooler to manifold (different hose this time). By the time the RAC man had searched for a new part, without success, and made a temporary repair to the old one we were too late to continue to Kent.

We phone our apologies and will have to make the trip later, to visit relatives. Still that's life.
Posted by Kim at 20:56 No comments:

Ok, that's enough. It's not funny any more. I've fallen over, walked for miles, frozen ... well you know. And I haven't ridden my Scooter for three weeks! 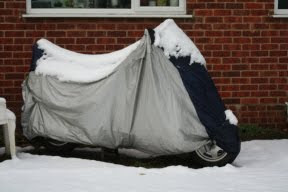 It's not the temperature, just the state of the roads; she isn't designed as a snow plough. Still there's a whole lotta thawing going on today, so things is lookin' good.

What is amazing is the inability of the English to be able to cope with the snow. I appreciate it's the worst we've had in the south for at least 30 years, but the whole country went into hibernation!

We hardly saw any gritting, or snow ploughs (or even tractors with buckets) but we survived!
Posted by Kim at 22:02 No comments: